A big mistake that any speaker wants to avoid is coming across like they are reading from a script. If this happens at least half of the message being delivered is lost and most likely more than that when it comes to the attention of the audience. At the same time, the speaker’s notes can be used effectively and there is nothing wrong with relying on these when giving a presentation.

When To Use Notes Personal speaking notes can be separate from the information notes that are going to be used in the presentation. It is not uncommon for speakers to use slides or powerpoint as part of their visual aids. These can have notes applied to them. The speaker can read these notes aloud word for word with no repercussions.

Notes are often used at personal speaking engagements. These too are acceptable, however, they should not be read word for word. Instead they can be used as cues to remind the speaker in which order he wishes to speak and to ensure that nothing is left out.

Don’t Just Rely on The Notes

Even though in most cases it is okay to have notes to follow it doesn’t mean that a speaker should be presenting unprepared. Just relying on the notes can be a disaster. It is even difficult to plan out the timing of the presentation if rehearsals are not carried out. Another mistake to avoid is within the writing of the notes themselves. Some make the error of writing out everything they want to say word for word. A better method is to compile the notes in bullet form. Some like to use small cards and write each topic they are going to cover on the notes with the applicable bullet points following this. This method makes sure the speaker isn’t going to get lost in the test. It is most embarrassing when a speaker loses their place in their notes and there is a long-drawn-out silence.

The large print format is also another way of making sure that the notes can be easily referenced. Keeping plenty of space between each keynote or bullet point.

No Need To Hide

Some speakers feel embarrassed about using notes so they will try to keep them inconspicuous. When they are used in the proper context there is no need for that. The audience really doesn’t mind if notes are used and this is not something that makes the speaker look inferior.

When To Put The Notes

One of the things to keep in mind with handheld notes is that they can inhibit body language. A better way of using them is to be able to put them on a hard surface like the podium. Keeping them here means the speaker can walk away at the appropriate time and then return to where the notes are when necessary. If the point by point system is used then the speaker simply returns to the notes as one point is coming to a close. If for some reason the notes are not in order or the last place is lost the important thing is not to panic. Some speakers get so concerned about this that their colour begins to change and some even perspire. This is much worse than a few moments of silence while you are finding your place. Also, it allows the audience to ponder upon the last point that was made.

Make sure you spend enough time preparing your notes and checking them for accuracy and ease of use. If you are not comfortable with your notes during your presentation it can cause you to lose your train of thought. This is a resource that now becomes a hindrance. 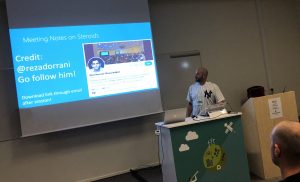 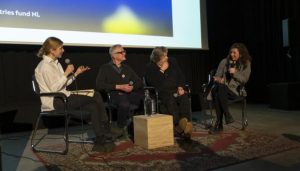 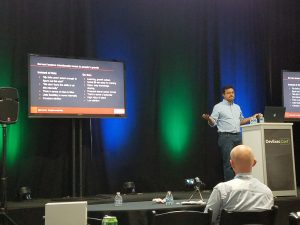